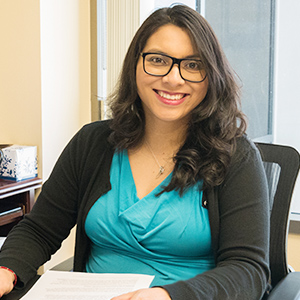 Jennifer Hodgins is an Attorney at the Law Firm of Alma Rosa Nieto. She has been working in
Immigration Law for the past eight years, but has long been dedicated to serving the community. She is
fluent in Spanish and has used this skill when working with clients on their immigration cases and while
volunteering at Bet Tzedek Legal Services in their Employment Rights Unit for four years.

Hodgins (nee Abolencia) was born in Los Angeles and grew up in the San Fernando Valley. Jennifer
graduated from University of California, Berkeley where she received her Bachelor’s Degree in
Psychology. While at Berkeley, she was a member of Alpha Phi sorority, studied abroad in Madrid,
Spain, participated in a “Teach in Prison” program at San Quentin, and worked on a research project
about Childhood Leukemia. She received her Juris Doctorate from Whittier Law School where she was
the Treasurer of the Public Interest Law Foundation and a member of the Hispanic American Law Student
Association.

Working in the area of Immigration Law has been especially poignant for Jennifer because she is the
daughter of two immigrants; one from Guatemala and the other from the Philippines. Given the many
changes that have been made in the last several years in this area of the law, and the many more that are
sure to come, it has been very fulfilling to be able to serve as an advocate for the immigrant community
and their families.

Request an Appointment from Anywhere in the World